Pulled straight from historical figures' cellars and miraculously salvaged from wartime wreckage, here are the 6 most expensive bottles of wine ever sold.

For most of us, a pricey bottle of wine is something we value for its taste -- the nuances in flavor or the spectrum of body profiles and aromas that derive from its terroir in the specific year in which it was conceived. It even represents a symbol of luxury or an appreciation for the finer things in life.

(And the finer things in life deserve only the finest glassware to celebrate them. Explore our beautifully handcrafted glassware collections here.)

For elite wine collectors, it means all of that and so much more. Each individual bottle constitutes a piece of consumable history. It's a tangible and experiential relic of time. One thats existence is fragile and limited; meaning that once any given batch has all been consumed (or, god forbid, dropped and broken), it is gone forever and impossible to replicate.

For those reasons and many more, some of these drinkable fossils have a price-tag that is simply inconceivable to the average wine lover. Listed below are six of the most valuable bottles to have ever been purchased to date:

This particular bottle was authenticated as belonging to the wine collection of Thomas Jefferson. It's hard to believe something so fragile was able to be preserved over the course of centuries. But what's even more unbelievable, is that it stood the incredibly long test of time, only to be knocked over and broken by a waiter, mere moments before it was going to be opened! Talk about a bad day at work. An insurance company ended up appraising it at $225,000 and paying out it's rightful owner. Though, he reportedly pushed for much more ($500k). Wine auctions are notoriously competitive, and bidding wars can end up bumping prices up astronomically from what the given bottle is actually valued at. Such being the case of this rarity from 1869, which was generally sold at a price point of around $60k each. It was purchased alongside the only other pair in existence by the same collector for almost $700k total. That's a lot of dough, but at least they can reasonably drink the first two bottles guilt-free and keep the third as a token of envy to all other connoisseurs. 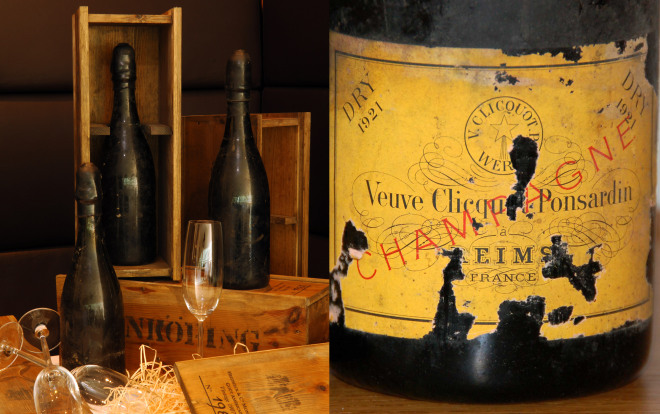 This big-ticket bottle of bubbly was actually salvaged from the wreckage of a Swedish Freighter off the coast of Finland in 1998. It was sunken amidst a German torpedo in World War I, but surprisingly, nearly 2,000 bottles of champagne were recovered intact. Now that's a bottle with a rich history. The 1947 French Cheval-Blanc is widely recognized as the most expensive sold bottle of wine in history at $304,375.  The 67-year-old bottle was sold in 2010 to a private collector at a Christies auction in Geneva. Cheval Blanc is graced with a class A status, one of two merlots to fall into said classification. 1947 is a legendary year for the grapes that were harvested between April and October in this particular area of France, which has become highly sought after and thus, extremely rare.

Well, it's a Rothschild, so that should tell you something. This vino derives from the vineyards of one of the wealthiest families the world has ever known, but it's not just the famous name that lands this bottle at number two on the list. Sommeliers and wine historians agree that this wine is simply one of the most incredible vintages of the last century. It was conceived right around the time the Allied Forces victory in World War II, which is indicated by the V as seen on the label. Sweet, sweet victory.

Did you do a double take when you read the year on this one? Well, it's not a typo. This Cabernet Sauvignon was not even a decade old when it was purchased for half a million dollars in Napa Valley. Given, it was a six-litre giant of a bottle, but it still stands as the single most expensive bottle of wine ever purchased. That's more than one straight out of Thomas Jefferson's cellar or a sunken wartime freighter ship! It is highly acclaimed as being one of the most exquisite young cabernets in recent history, but the charitable nature of the auction may have jumped the bidding up for those who were willing to spend the big bucks for a good cause.

Does all of this wine talk have you craving a glass? Us too! Treat yourself to a fine wine in the glass it deserves. Check out Orion's selection of wine glasses here.